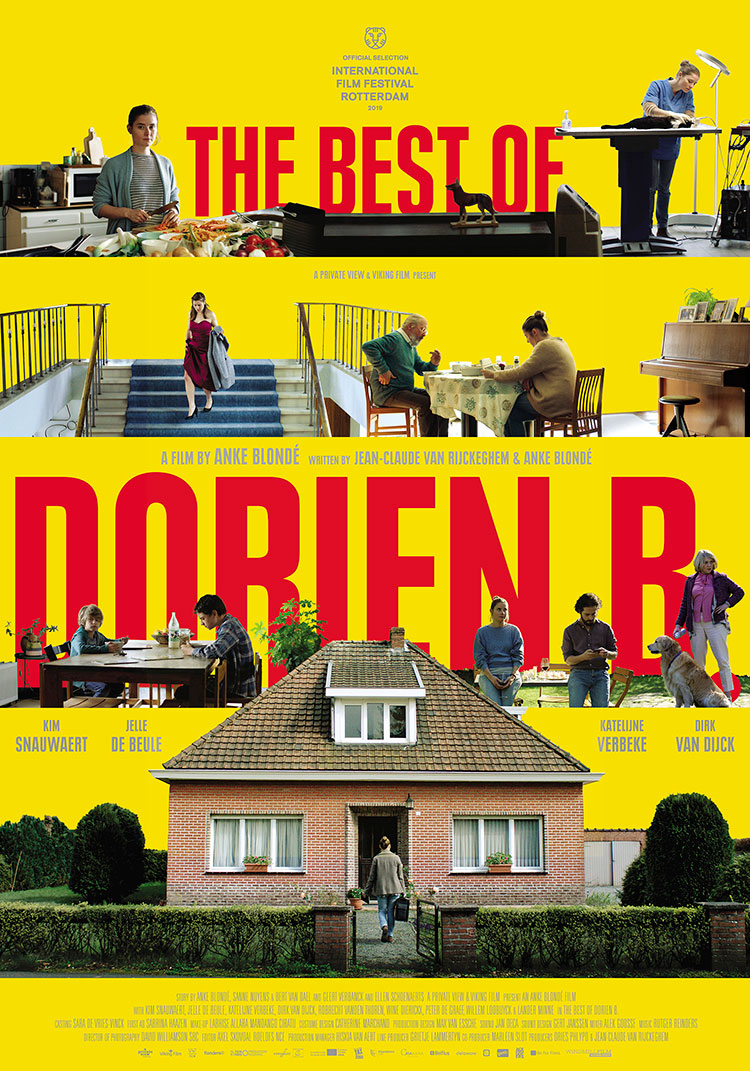 When Dorien discovers a lump in her breast, her first inclination is to pretend, fervently, that nothing is wrong. It’s an approach that she has been leaning on rather heavily of late. A seemingly gilded life – she’s a vet with her own practice, a mother with two children and a wife with a handsome, successful husband – has something malignant at its core, something which spreads and taints everything it touches. Like the very relatable Kim Snauwaert in the central role, the comic elements in this perceptive drama are achingly wry and given to moments of eye-rolling complicity. The audience is positioned firmly with Dorien against the world, or at least against the self-absorbed and self-regarding members of her immediate family.

…knotty, fully realised female characters
The first feature from co-writer and director Anke Blondé, Dorien B. showcases her talent for creating knotty, fully realised female characters and, drawing on skills from her other career as a casting director, for seeking out the perfect match of acting talent to role. Snauwaert is superb in a film which will tap into audience appetites for grown up, female-led drama. The low key domesticity of the story and clear-eyed observational approach means that it should work as successfully on a small screen as it does in a cinema. Still, theatrical releases are possible and festival interest is highly likely.

The lump is a moment of punctuation in Dorien’s life, a pause to look over the coasting family chaos and to realise that, in most situations, she is putting more in than she is getting out. She knows enough about medical diagnosis, albeit of small pets not humans, to suspect that what ails her is likely to be serious. And as she struggles to claim the attention of her husband and parents for long enough to tell them, she starts to realise that there is sickness elsewhere in her life.

A disagreement between her parents about whether or not to build a pool escalates into marital breakdown when it becomes clear that Dorien’s mother (Katelijne Verbeke) has been having an affair. Evicted by her husband from the family home, Dorien’s mother moves in with her daughter, her larger than life personality filling the increasingly unbridgeable distance between Dorien and her husband Jeroen (Jelle De Beule). An affair between Jeroen and a colleague is, he assures his wife, over. But Dorien has reason to suspect that the flirtation is ongoing.

A deliberately sloppy piano score, which sounds as though it was played for tips in a boozy dive bar, brings a slightly absurd flavour to the multi car pile up of bad luck in Dorien’s life. While the inclusion of a didgeridoo is a step too far into wackiness, the picture somehow gets away with using a vintage track by the Smurfs at one point.

Stand out scenes – which announce Blondé as a deft hand, reminiscent of early Lone Scerfig, when it comes to blending pathos with comedy – include Dorien’s breakdown confessional during a parent-teacher meeting. She found out about her husband’s infidelity, she sobs, when she stumbled on an email from his colleague “written from the viewpoint of her talking vagina.” Elsewhere, amateur Tae Kwondo skills have rarely been better used than they are in an athletic prelude to a sex and a wronged-wife payback moment.